You are here: Home / Carolyn Crane / Guest Post: Hubs Reads a “Smexy” Book and Lives to Tell the Tale!

Hubs, aka Kevin, finally picked up a book I rec’d and read it – the whole thing. Then he picked up five more. Today, hubs is here to talk about his experience and I believe the words “I admit defeat” are spoken loud and clear ;) Take it away Kevin.

I tend to read in large spurts because I read a book that particularly interests me, and then follow that with a few other novels until I get too busy. I personally read mostly sci-fi or thriller novels, most notably I am a big Stephen King fan. Having read his most recent novel, I was kicked into my reading gear and was left in a rather difficult situation. Over drinks, a friend recommended a fantasy series to me which I readily purchased on Amazon. Having two profound strikes against me in the Smexy household – first, being a man and second, being an average reader (meaning I don’t complete more than a dozen novels per year), Smexy intercepted the package and told me that I wasn’t allowed to take a recommendation from a friend if I refuse to read a book she has recommended to me. So being forced to read a book that I didn’t necessarily desire reading, and the reality that I am in fact a very stubborn individual, I fully expected to slog through the book and move on to read the series I was awaiting. Obviously, the recommendation was coming from a well versed veteran of reviewing, and most important, a book she held under high acclaim. I took the novel and forced myself to start reading. 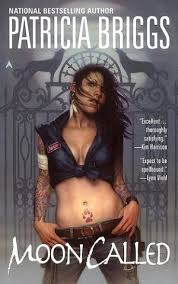 The novel, Moon Called by Patricia Briggs, was the first book I had read which dabbles squarely in an Urban Fantasy world of Vampires, Werewolves and Fae. I have to admit: expecting to trudge through a book and instead finding myself immediately sucked into a story I was truly enjoying made the process all the more entertaining! The novel was exciting, with twists and turns that kept my mind rapt in the story, and my focus keen for the next step. The characters which were well crafted, and alluring, with their own quirks and conflicts, made the story and plot-line addictive. So much so, in fact, that instead of my planned denial of my favoritism toward the novel (obviously because that would mean that smexy wins), I had to admit defeat.

Mercy Thompson, although an interesting character, and someone who would always be there to protect you in a time of need, wouldn’t necessarily be the best friend to have. She has a profound way of attracting trouble from the worst of the nasties! I should know, after I wrapped up Moon Called, I couldn’t resist the urge to move forward onto the next (and yes, the next and then the next and then the next). I personally loved each of the novels and the ongoing storyline (and yes, I cannot wait until the next one!). The constant ongoing internal battle (within Mercy’s mind) between Adam vs Samuel. My vote is with Adam here, Samuel, although a strong lead was a bit too whimsical at times to take him as a serious Alpha. Plus, I think Adam has a far better sense of humor :). Adam’s obvious issues with being the Alpha and maintaining control over the pack (even when they are all just sitting around eating milk and cookies). Zee,  and the depiction of the Fae and their absurd rules about being Thanked. That rule itself has made me evaluate most of what I say now for fear of becoming a slave to some Fae folk unintentionally. Which is why I have to say to Smexy: ‘I enjoyed the book, and the whole series for that matter. It is much appreciated.’, careful not to accidentally thank her. I mean, yes, I am married to her and have known here for most of my life but if there is one thing I’ve learned from this series its, you never know.

One final important factor that made this series so worthwhile was the way Briggs offers bother conversational humor between characters as well as the more memorable situational humor. I won’t ever forget the scene (from Bone Crossed) which places Mercy, in Coyote form, cascading out the door of Uncle Mike’s dragging the magical trap which had caused a sudden ferocious rise in the pack violence inside. Trailing her and shattering the door frame and the surrounding wall is a fae (Snow Elf), who, after the trap is removed, is detailed later hopelessly picking up debris that he left in his wake. I couldn’t help but laugh, thinking of the bewildered expression on his face. 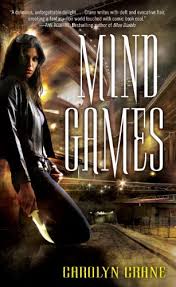 After I was forced to announce defeat, I accepted the duty of reading one more of Smexy’s Favorites: Mind Games by Carolyn Crane. I have to admit, this was another excellent read.  I don’t want to give anything away for readers who have not yet picked up this book, but I highly recommend this first in a trilogy. The entire basis of the logic behind the book had me hooked instantly. A cast of characters, each with their own debilitating mental illness, turned into a sort of super hero mental squad to fight Evil doers. The world is inhabited by humans and more-than-human "highcaps", people with excessive mental abilities giving them phsychological powers like telepathy, telekinesis and mind manipulation. The story starts out on the heroine, Justine Jones, and her continual battle dealing with her health fears (she believes she is dying of a rare brain disorder).  While dining with her boyfriend, she meets Packard, a "highcap" with the ability to read peoples psychological weaknesses. He is the lead of a team of humans, each with similar anxieties, which he has trained to "zing" their anxiety into another person, and in turn disillusion them. The end result of the "zinging" is a rapid mental weakening of the target, and an instantly gratifying feeling that numbs the fears of the owner. Hired by people to punish criminals, the team fights crime in a brand new way. I simply cannot wait for the next part of this trilogy!

Thanks Kevin! I should mention that when I asked Kevin what he would rate Mind Games, he told me 4.5/5 – he took a half point off because there was a sex scene. Oh hubs. We still have a long way to go. ;)

I think these are two great series for guys to read. Kevin didn’t mention this, but he also just started Spider’s Bite by Jennifer Estep. See- he can’t help himself when it comes to the Urban Fantasy genre now ;) I also have Ilona Andrews, Jim Butcher and Laurell K. Hamilton waiting for him.