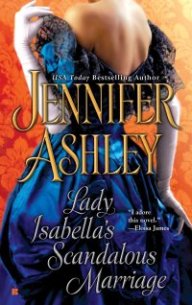 Why I read: Adored the first book in this series, The Madness of Lord Ian Mackenzie.

Lady Isabella Scranton and Lord Mac Mackenzie made every gossip paper in London when they eloped six years ago after falling in love at first sight. Although extremely wealthy, Mac who comes from a very boisterous family, is not the match Isabella’s family wants for her. Disowning her, Isabella was heartbroken, but so in love with Mac they spent the next few years in wedded bliss. But slowly, Mac’s drinking and leaving in the middle of the night started to wear on Isabella. He would come home from long absences and they would start a passionate affair, but would soon burn out. Finally, after three years, Isabella couldn’t stand it and separated from Mac.

Now three and a half years later, Mac hasn’t painted a decent portrait since Isabella left him. He has been desolate and extremely depressed over his separation. He has stopped drinking and tried to make himself a better man. When Isabella knocks on his door to warn him of someone forging his work, he decides the time is right for a proper seduction of his wife. Isabella takes a look at Mac, in nothing but his kilt, covered in paint, and can’t help but feel a longing for his touch again. When Mac gets wind of someone impersonating him, and matters turn violent, he will do everything to protect Isabella.

I started Lady Isabella’s Scandalous Marriage with trepidation. First of all this book has been greatly anticipated. The first in the series, The Madness of Lord Ian Mackenzie is on the list of my all time favorite books. It not only introduced us to Lord Ian, but his rowdy, loving, and very mysterious brothers. I was very curious to see how Mac would stand up to Ian. But I also worried because I have read other paranormal romance and erotic books by Jennifer Ashley written under various pen names and always walked away very disappointed. It is almost like a different person writes this series. I absolutely adore her style and her characters. I still think Ian holds top spot in my heart but Mac, with his passion and charm very much endeared me to him.

What I like best about this book is that both Mac and Isabella are grieving over their ruined marriage. The first fifty pages holds such intensity, tension and heartbreak I about ripped out my hair. These are two people who truly love each other, and want another chance with each other but Isabella questions whether Mac’s good graces will last. Will his sobriety stand the test of time? One of my favorite scenes from the book is right at the beginning, when due to outside circumstances Isabella is forced back into Mac’s life. They both accept they love each other but there is such a far way to go.

She heard the break in his voice, turned her head to see his copper-colored eyes swimming with tears. It was his tragedy too, she knew.Their shared grief.

This is also a very romantic, passionate book and Jennifer Ashley can write great romance scenes. Having been together for over three years, these two are not shy in the bedroom and their playfulness really shines through. Plus there is a very naughty scene with scones and clotted cream – what else could you ask for?

I was afraid after the first 50-100 pages the tension and Isabella’s indecisiveness would get on my nerves but that never happened. It was very clear she wanted Mac, but she needed time to see if he was going to revert back to his unruly self. She makes him court her and there is a scene where he shows up at her door (although he was staying at her house) to take her for a drive and he acts extremely proper that had me laughing out loud. Although Mac is the one that needs to redeem himself for his past actions, he is such a good hearted, warm person, you just know Isabella is not going to be able to resist.

I really think this series is a must read for all historical romance fans. Next up is The Many Sins of Lord Cameron and I can’t wait!