You are here: Home / B Review / Review: Entwined by Elisabeth Naughton 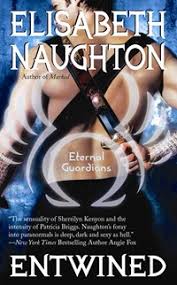 Favorite Quote: ”It’s not at all what you think it is. It’s eight hundred years of searching for you and ten years trying to live without you. It’s being close to you and wanting something I can’t have. And that’s not sex Callia. That’s you. Just you.The only thing I’ve ever wanted.”

Zander is the most feared of the Eternal Guardians. It is claimed he cannot be killed and he fights like he has nothing to lose.  But as the famed descendant of Achilles…he must have a some vulnerability.

The forces of daemons have broken through the underworld and are gathering. The Eternal Guardians are needed now more than ever to protect their own realm and the human world. With the threat of war coming was Zander can not afford to think about what might have been with his soul mate. Yet with a never ending eternity looming in his future…he can’t bear a life without her.

Zander is one of the strongest and most fierce of the Argonauts. His fighting and healing ability out shines all others. So does his life span. He is getting tired of outliving everyone he knows. Ever since being rejected by his soul mate, Zander has tried in vain to end it all. When he and the other Argonauts are summoned before the King to be chosen as a suitor for his daughter, the princess, he volunteers thinking that this may finally enable him to forget Callia.

Callia, the King’s healer, is shocked and hurt when finally seeing Zander after ten long years, he is to be married to the Princess. Though she swore she was over him, seeing him has awakened the all consuming passion she’d felt for him from the first time they met. As they both try to hold on to their anger and hurt, circumstances put them together and force them to truly look at what tore them apart. As they sort through the lies and deceptions a discovery is made that will forever bind them to one another.forever.

Entwined is the first book I have read by Elisabeth Naughton and I feel I have been missing  out on a fantastic author. Using Greek mythology and mysticism, Naughton sets up a world lush in detail and design. Her story places us in an archaic realm where Kings still rule and females are “protected” for their own good. Greek gods & goddesses meddle from the Heavens offering  cryptic advice to those who they feel are deserving.
Reading about the society from which the Argonauts hale, I was intrigued and appalled at the same time. The word skills here are phenomenal in relation the emotions they invoked as I read about their world. In their world the women are always the one to blame. If a woman is raped and she is married-then it’s adultery and she is punished. Education and even pants are frowned upon though they are definitely more modernized then they were 100 years ago. Marriages are arranged and a particularly barbaric custom applied to those who venture from prescribed customs.

As I divulged deeper in to the story line of the main protagonists it was heartbreaking to witness their pain. Zander and Callia are both strong emotional people who are mired down by the anger and guilt towards each other.  Once the deception is made public, they’re still far from any chance at happiness. Regardless of their love, their loyalty and honor forces them to do what is right-even at the risk of their own happiness. The chemistry between them leaps off the pages burning you in strength and depth.There are scenes where does something that shows just how much they love the other and the brutal honestly of it is almost embarrassing to watch. Like your eavesdropping on a private moment. I had to force myself to not skip ahead to the end just so I could make sure they would both be alright.
Zander was a tad too Alpha for me at times. After reading about their culture, his treatment of Callia at times irked me. She wasn’t a child and while you want to do everything to keep someone you love safe, you cannot lock them in a padded tower. Callia also irked me at times. Her willingness to tell others to stand up for themselves yet wouldn’t follow her own advice was hard to watch.

The secondary characters are filled with life and explode off the page with personality and  depth. All require a story of their own. From the King’s machinations to the Princess’s deceptions to the council’s Machiavellian designs.  There are so many undercurrents and little subplots through out the book that I felt there should have been an additional 200 pages so I could find out what happened.

The daemons and the goddess who commands them, Atalanta, are frightfully evil and corrupt. Just the way villains should be. The action is plentiful and creates some nail biting and humorous moments in the book. I found the spin that Naughton uses to explain that which links Callia and Zander to Atlanta to be deliciously suspenseful and fraught with intrigue.

I truly enjoyed my foray into The Eternal Guardians world and will be on the lookout for the next one in this series.