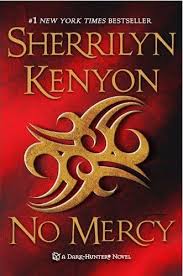 "Live fast, fight hard and if you have to die then take as many of your enemies with you as you can. That is the Amazon credo and it was one Samia lived and died by. Now in contemporary New Orleans, the immortal Amazon warrior is about to learn that there’s a worse evil coming to slaughter mankind than she’s ever faced before….."

I remember discovering Sherrilyn Kenyon’s Dark Hunters and having a marathon reading session. I had just finished the latest JR Ward book and was desperate for more paranormal smex. Valerius and Tabitha are my favorites from this series, but I think she did a great job building up the anticipation for Acheron’s story too. But since Acheron I haven’t kept up very well *spies Bad Moon Rising in TBR* I’ve been a bad Dark Hunter fan!! Still looking forward to this release next week though!

After poking around Sherrilyn Kenyon’s website, I have to give her lots of credit – it is organized much better than what I remember. Just take a look at her character page!! I love that it lists every book each character is in. That makes my organized obsessed little heart beat extra fast.

No Mercy is Dev Peltier and Samia’s story and it comes out next Tuesday, September 7th.

Don’t leave without telling me your favorite Dark Hunter character! Should I make a prediction and say Vane will win by a landslide? :)