You are here: Home / A Review / Review and Giveaway: Sin Undone by Larissa Ione 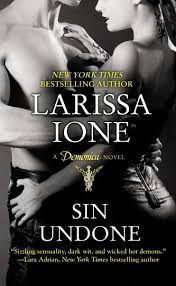 Favorite Quote: "A tremor shook her body at the undercurrent of possession in his tone.
He wasn’t done because he hadn’t gotten what he wanted from her yet.
And as she looked into his heated glaze, she knew what he wanted.
Her soul."

As the only female Seminus demon ever born, master assassin Sinead Donnelly is used to being treated like an outcast. She spent decades enslaved, and now vows she’ll die before she’ll relinquish her freedom again. Then Sin’s innate ability to kill her enemies goes awry: she creates a lethal new werewolf virus that sparks a firestorm of panic and violence.

Half-werewolf, half-vampire Conall Dearghul is charged with bringing in Sin to face punishment for the plague. And she’s no stranger – He’s bound to her by blood, and the one sexual encounter they shared has left him hungering for her raw sensuality. Worse, Sin is the underworld’s most wanted and Con soon learns he’s the only one who can help her . . . and that saving her life might mean sacrificing his own.

In Sin Undone, Sinead Donnelly (Sin) is the only female Seminus Demon in existence. Formally a slave to a master assassin, she now runs her own den and vows no one will EVER own her again. Her gifts are particularly nasty. She can mimic, a manipulate, and infect anyone with any disease she chooses. When she infects a made were, the disease mutates and creates an epidemic that is sweeping through the were population and killing them. The weres are up in arms and want her head on a platter. Her brothers do everything possible to find a cure and protect her but Sin has spent her life alone and and trust does not come easy to her. When a price is set upon her head and her own men turn on her, Sin must turn to the one person who can tear through her barriers and break her heart-Conall Dearghul.

Conall Dearghul, a dhampire (half werewolf, have vampire), has his own problems. Commanded by the were  council  to bring Sin in to face judgement, Con finds that everyday he spends with Sin he falls a little more for her. He has also been commanded by his vampire clan to return home and assume his place in the hierarchy.

Con sees a lot himself in Sin. Both of them have spent their lives alone-deserted by everyone they ever loved. They barricade their hearts and emotions underneath layers of attitude. But Con sees a future with Sin; if they can stop the epidemic and stay alive long enough.

This is classic Larissa Ione. Her Demonica series have been a favorite of mine since I picked up the first one and this one stayed true to form.
Ione has created a fantastic supernatural world rich in detail and imagination that fans the flames of your interest through out the entire series.This roller coaster ride of tension, suspense, and romance that me hanging on for dear life and quivering with anticipation for the final outcome.

Her characters are engaging and personable. Each one a separate story unto themselves. I fell in love with each and everyone one of them.
Sin had to be my favorite of all Ione’s demons. Seductive and strong yet with a vulnerability that tugs at your heart- Sin is a hard ass you fall in love with. Just enough attitude without becoming annoying. She is the perfect PNR heroine. I adored her when we first met her in Ecstasy Unveiled and was pleased to see Larissa’s last book would devote to her. Having spent her life alone, she shys away from any emotional attachments but you see a softer side of her as she and Con race towards finding a cure. I especially liked how no matter how hard she portrays herself, she would give her life to undo the damage she has done. She shows on multiple occasions the lengths she will go to save someone from harm.

Conall is hot. Smoking hot. While he is as alpha as the other men in Sin’s life, he respects Sin and treats her as an equal. Even though he originally slept with Sin on a bet, from that moment on he has never forgotten her. He is now bound to her in blood and body. He senses how hurt and betrayed she feels and strives to show her that she has friends and family that truly care about her; including himself.

While the physical attraction is immediately acted upon, the actual romance simmers slowly through the book and becomes a blinding arc of love and passion that leaps off the pages. The chemistry between them makes for some very hot and unforgettably smexy scenes.Watching Sin and Con both change and grow in this book was heartbreaking at times. Each of them fighting their own demons and slowly accepting love and help from others was an emotional journey that required a lot of sacrifice on both sides.

I loved seeing all the brothers as they interact with Sin. No matter what she has done, they are behind her 100 percent. There is much humor in this story between all involved and we see a lot of ends tied up neatly.
The multiple story lines are filled with much tension and emotion yet flow evenly and smoothly to merge together for a climatic ending that had my heart stopping quite a few times.

While I’m sad to see this series end, I console myself with the knowledge she will continue this in her spin off series featuring the four horsemen of the Apocalypse.

If you’ve never read this series I highly recommend you run, not walk, to the nearest bookstore and start this series. While Sin Undone can be read alone, you’ll miss out on a lot of back story and the over all arc by not starting at the beginning.

Thanks to Hachette, I have FIVE copies of Sin Undone to giveaway! Open to US/Canada through Saturday September 4th. To enter, just leave a comment and your email if not in your profile.