You are here: Home / A Review / Review: The Reapers are the Angels by Alden Bell 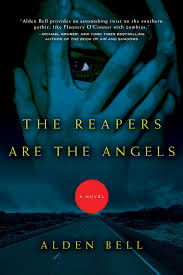 Favorite Quote: ”A fellowship that talks in a language of death. His will to destroy her and her will to remain undestroyed-both things are beautiful and holy.”

For the last twenty years, civilization has balanced on the edge of a precipice. A deadly plague struck converting the living and dead into the living dead. The true living barricade themselves in enclaves, eking out a meager survival. Temple, a young woman, wanders this desolate landscape, clinging to her memories and demons. She doesn’t remember a time before zombies but she does remember a kind old man who took care of her until tragedy struck. As Temple starts her own journey towards redemption and salvation she will encounter many forms of life. Some who will help her, some who will hurt her, and some that will open her heart and finally lead her home.

The Reapers Are The Angels is a dark and mesmerizing southern gothic tale of self discovery, survival, and redemption. Set in a post apocalypse setting, we are shown a society 25 years after a zombie uprising that is slowly beginning to rise from the ashes. It all take place through the thoughts and stories of a young girl named Temple. Born into this desolate world, it tugs and twists you to hear her thoughts on what is essentially the norm for her. I found Temple to be an endearing and fantastically strong protagonist. She operates on another level of consciousness. Swift, calm, and sure-she deals with each calamity as it comes along. Due to past tragedies, she is constantly alluding to the evil she believes taints her soul, fearing more what she believes she is then anything else that roams this dangerous landscape. She’s a wanderer and a recluse, exiling herself from society as punishment for her perceived transgressions. Reading her thoughts on God, redemption, and salvation struck a chord with me. She is so young physically ( 15-16 years old) but so much older soul wise.

When her private sanctuary is breached, she strikes out to find a place for her to live in the solitude she craves and expects. She encounters a group that has commandeered a section of the city and have begun to rebuild a life for themselves. When Temple is assaulted and extracts her own brand of justice, she is forced to leave the settlement to escape retribution. I found it rather poetic that she acknowledges feeling more at home out in the world among the Zombies and unknown then among other humans. She often states that at least with Zombies you know where you stand. That their desires and wants are simple and easy to understand.

When Temple finds Maury, her chance at redemption is given. A victim and a mute, Maury sparks Temple’s long buried humanity and she sees a way to save Maury and possibly herself. But her past follows her; dogging her every step, demanding his pound of flesh. Moses and Temple have a unique and complicated relationship. On one hand he wants her dead. On the other hand he also cares for her; rather like a father. He is the one person who truly sees and understands what Temple is. It’s a convoluted relationship that holds your attention and forces you to look beyond the words written into the very hearts of these two characters.

As we follow Temple, Maury, and Moses across country we are treated to Temple’s thoughts in of the present and the past. The prose of this story is astounding. We see what Temple might have become had she not been born in such a tremulous time. There are certain scenes that show us the “what if’s and could have beens”. The bleak landscape that Mr. Bell paints is underscored with faint hints of hope, humor, and love that takes a simple story about zombies and the aftermath and elevates it to a much higher standard. The writing style is written in a detached 1st person style so you feel more as though your being read to which further empathizes the almost fairytale quality of the story.

The ending is both sad and illuminating in its conclusion. While I knew what was going to happen… what had to happen, I was not prepared for the emotion that it engulfed in me when it happened. While I have never been a post apocalypse or Zombie genre reader, this story captured my interest, held my attention, and left me thinking about it long after I was through.This is definitely a keeper for my book shelf.