You are here: Home / B Review / Review: Emily and the Dark Angel by Jo Beverley 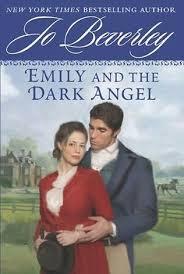 Favorite Quote: “He’s called the Dark Angel. The devil. His horse is called Beelzebub. He shoots men who like sago pudding.”

“Seems fair. Only the lowest form of life would like that slimy stuff.”

Jo Beverley’s Emily And The Dark Angel was originally part of a series that began with Lord Wraybourne’s Betrothal. I have waited a very long time for Piers Verderan’s story and am pleased that it lived up to my expectations.

Emily Granwich is a 20 something spinster who lives a quiet life in the country with her invalid father and eccentric aunt. Her brother is considered missing in action so she handles the family’s estate business much to her father’s dismay. When in town on business she is “assaulted” by a flying box of violet body powder which erupts and covers her head to toe.

The intended victim of the powdery weapon is Piers Verderan. Dubbed the “Dark Angel” by enemies -he is considered a deadly man without a conscience. In town for the start of the hunting season, he comes to Ms Granwich’s assistance and soon appears in Emily’s life more often then she likes.

Yet for all the rumors surrounding him, Emily can’t help but wonder if Piers is as bad as he is painted? Though warned that no decent woman should be seen in his company, Piers shows remarkable restraint and courtesy when in Emily’s company. As our hero and heroine begin the intricate dance of romance and love, will Emily listen to her heart or her family when dealing with her Dark Angel?

So now you all know. My secret vice is Regencies. I adore them. The older and cheesier the better. I’m not sure why because they offend my feminism on all levels. lol But I think we all have a teeny tiny place in us that wants someone to take control. That’s what Regencies do for me. They give me a larger then life hero who annoys me, frustrates me, and utterly captivates me. He maneuvers and manipulates my whole world so that I will marry him and live happily ever after. *sigh*

Piers Verderan is a proper Regency hero. Handsome, autocratic,and deadly, Ms. Beverley takes him up a notch by injecting humor and snarkiness into his personality. His witty conversations with Emily and other characters was rather like watching a “who’s on first” skit. While you have no doubt he is deserving of his moniker, the Dark Angel, you feel assured that circumstances will reveal to you and Emily that he is not as black as he seems.

Emily is a bit innocent (the pudding fiasco cracked me up) but she is also strong in mind and emotion. She doesn’t fight the current but merely flows along until another avenue opens up.

I did feel she jumped to the wrong conclusion a bit to much but forgave her because with Piers, she’s just in over her head.

Jo Beverley has a way of creating characters that follow the society’s dictates for this time but also mesh well with the modern reader. We are not given wimpy vaporish females nor condescendingly boring males They are an unconventional lively bunch that has you cheering them on in abundance.

The story flows along at a fast pace and the end result is a delightful Regency filled with memorable characters, a delish little scandal, wicked stolen kisses, and a wonderful ending that had me heaving my happy sigh.