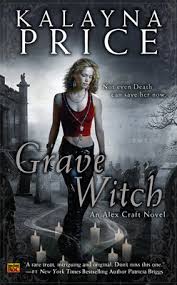 Alex Craft is a private investigator for Tongues for the Dead. She is a grave witch – someone who can raise shades from the dead. These shades can then speak to family members or police  – those needing answers that only they can provide.

Alex has a lot going on in her life all of a sudden. She is desperate for work so she can pay her bills and feed her beloved dog, PC. Governor Theodore Coleman has been found dead and that means the lieutenant governor who also happens to be Alex’s father has the big new job. Alex and her father are not on speaking terms – her father is a supporter of the Humans First Party, those that despise magical beings. Her sister, who she also never speaks to begs her to raise Coleman’s shade to find out who killed him. In order to get to his body, Alex agrees to help her favorite police detective John. In return, John asks her to raise the shade of a murdered girl – the third girl murdered in their town of Nekros recently. When Alex tries to raise her, something goes terribly wrong. On top of that, something is off with Coleman’s dead body. While investigating, Detective Falin Andrews comes on the scene. New to the police department, he has no patience with Alex, but she knows he holds many secrets. They are forced to work together and an attraction slowly develops.

Oh, and did I mention Death is a hot dude in jeans? He may take the life out of people, but he looks good doing it.

Grave Witch is the first book in Kalayna Price’s Alex Craft series. While I had some problems with the beginning of the book, the last 100-150 pages really caught my attention and played out well. We have witches, Fae, ghosts, and they all get intermingled. The world knows there is magic, and Alex uses hers to make a living. Told in the point of view of Alex, I didn’t get along with her at first. Instead of coming across tough and sarcastic, it felt more like abrasive and crass. I just didn’t like or get her in the beginning. Further on, as we get to know her, I definitely warmed up to her and I ended the book liking her very much.

Falin comes on the scene with lots of secrets, which is fun and mysterious – but Alex doesn’t pursue who he is. She knows he just started working for the police force and she soon realizes he has information she really needs relating to her case. And while she doesn’t go after him the way I thought she should, she also lets him sleep in her apartment without ever truly digging for information on him. I wanted her to be more eager to find out who he is. He saves her life once, so she uses that as a basis for trust. That is not enough for me. However, Falin comes to be quite the smexy beast. I like surly heroes, and he definitely gives Alex a hard time in this book. He really grew on me and I want more of him!

Death shows up throughout the book, sharing a very sexy cup of coffee with Alex and I would have loved to have seen more of him. We barely skim the surface of his character and the sexual tension in this book could have definitely been notched up if he had made more appearances. I liked where we ended with him in this book and I hope we get much more of him in book two!

With a few glitches in the beginning, I ended up enjoying Grave Witch and I look forward to more Alex Craft next year.