You are here: Home / Contemporary Romance / Review: Hard to Hold by Julie Leto 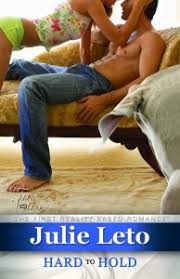 Michael Davoli has just moved to Albany, New York – single, with only his beloved dog to keep him company. He has some friends in the area, but he is ready for a relationship – if he can only find a girl. Out one night with some friends, he literally runs into Anne Miller. Anne is a crime reporter for a local newspaper, and is single herself. They fall into easy conversation, but when Anne asks him to go get a drink at a local bar, Michael refuses.

Besides his allergies flaring up, Michael has Tourette’s Syndrome, a condition that makes him blink rapidly, and sometimes when he is in his anxiety situations, his neck and hands twitch. He doesn’t want to push that onto this beautiful woman quite yet, so he politely refuses. It isn’t until a few months later that he runs into Anne again – when he is moving into his new apartment. Which just happens to be in the same building as Anne. Both still interested in the other, Anne finally gets tired of waiting for Michael to ask her out and takes matters into her own hands. From here, they start the dating game and see where things go.

Hard to Hold is part of the True Vows series, a reality series based on a real life couple’s relationship. You can go to their website and see the real life couple and read more about them.

Michael is all around a shy hero. Bordering on beta status, it was hard for him to make the first move in this book. His confidence is hurt a bit with his Tourette’s syndrome, although once revealed to Anne, it does not become an issue as they move forward.

Anne loves the show 24, wants more from her reporting job, but has an optimistic outlook on life. Michael and Anne are opposites in some aspects but compliment each other also. Michael is obsessed with cleaning and order, where Anne could care less where her dirty clothes land. Anne screamed in terror when she found a dead mouse in her apartment, and Michael plays the knight and disposed of it for her – and of course does a through cleaning afterwards.

While this is a light and sweet book, it is also incredibly slow. There is not a lot that really stands out in this story. It is cute and at first I really liked Michael. They do have some ups and downs in their relationship but I needed more. I don’t know – maybe I need a bit of “unreality” in my love stories. It lacked for angst and drama. It lacked any sort of suspense. It also felt as if the sex scenes couldn’t decide if they were going to show the lovin’ or close the door. We got to the bed, but then it was wrapped up really quick.

I get that “normal” romance is not always filled with drama. But to turn it into a romance book where I am going to spend money to read this story, I expect more.

The True Vows Series includes:
Hard to Hold by Julie Leto
The Icing on the Cake by Alison Kent
Meet me in Manhattan by Judith Arnold