You are here: Home / B Review / Review and Giveaway: Rebel by Zoe Archer 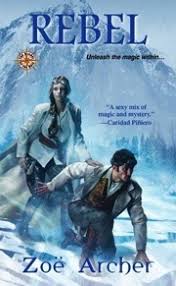 Favorite Quote: This was not a girl’s shy kiss. Astrid kissed like a woman, full and unashamed.

Attorney Nathan Lesperance is kind of an outcast. Being the first Native American attorney in Vancouver, he is used to fighting his way to the top. Taken out of his home and sent to live with white people at a young age, he is also used to feeling out of place and has felt the need to prove himself ever since.

He is sent to the Northwest Territory in Canada to wrap-up some legal business with Astrid Bramfield. Astrid gave up her membership in The Blades of The Rose (those that protect the magical sources in the world from the evil Heirs of Albion) when her husband died in battle with the Heirs five years ago. Ever since, she has secluded herself deep within the cold wilderness of Canada, alone, breaking off all contact with her family and other members back in England. She has made the day’s journey to the fort to turn over a deceased trapper’s belongings. When she meets Nathan, there is an instant connection. She sees him and treats him like a man, not like an outsider or savage creature. She also notices magic surrounds him, something he is totally oblivious to.

Nathan not only takes in the breech-clad, gun slinging beauty Astrid, but the landscape is calling to him. He can almost hear the mountains asking him to come explore. When The Heirs of Albion come calling to the fort, in search of Astrid, Nathan’s protectiveness goes on full alert. The Heirs are now in possession of the very powerful, primal source and they know Astrid is very knowledgeable on this subject. Astrid and Nathan go on the run, Nathan discovers he is much more than just a man, and a love blooms in the wilderness.

I adore Rebel. I think Zoe Archer has such a skill for writing these tough, independent heroines who can fire weapons, live in horrid conditions and keep up with the toughest of men – yet – their heart is open to love. They have a great sense of humor. Astrid is still hurting so much over her dead husband, but cannot deny her feelings towards Nathan. Ever so slowly, this woman who has lived on her own in the wilderness of Canada, comes to rely on a man who has never been close to anyone in his life. They both accept their fate early on, it just takes awhile for them to actually believe it.

“You are a stubborn son of a bitch.”

“An arrogant, stubborn son of a bitch,” she amended.

“And you’re a recluse, a mountain cat who’s just as stubborn.” He unclasped his fingers from around her arm. A softer woman would bruise, but she wouldn’t. “We need to get back on the trail,” he said, yet added when she let out a small sigh of relief, “but don’t think this is over between us. I never back down from a challenge.”

She tilted up her chin. “Is that what I am to you, a challenge?”

“Oh, no, love,” he said softly. He stroked the skin just beneath her bottom lip with the pad of his thumb and was rewarded with a blaze of returning desire in her eyes. “You’re much more than that.”

Nathan is so surly and over protective and Astrid is just the woman to give it right back to him. Their chemistry really shines. For as much as this book is an adventure, entirely set in the Northwest Territory of Canada, we get so much page time devoted to Nathan and Astrid’s relationship. However, I really enjoyed the adventure in this one, and almost felt like I was in the harsh conditions with the characters. As Nathan goes on a hunt with Astrid to protect sources, he finally finds himself as part of a team, and he likes that feeling.

What makes this book even more special is that we get to know The Blade member Catullus Graves. He will be the hero in the next book, Stranger, but in this one he comes to the aid of Nathan and Astrid. He is a long time friend of Astrid. We learn he is obsessed with fine waistcoats and girls with freckles, yet he has never been in love. Always the gentlemen, and extremely smart (he excels in inventions) he is also not afraid to get dirty in a fight (as long as his waistcoat is not too ruined). It is hard to explain the allure of this character, but I haven’t felt this excited to get my hands on a future book for awhile.

Recent Reviews:
All About Romance – B+
Goodreads

Zoe Archer is offering up a copy of Rebel to one lucky commenter today. To enter, just leave a comment. Open to US/Canada through Friday November 5th.