You are here: Home / Fever Read-Along / Welcome to the Bloodfever Discussion! 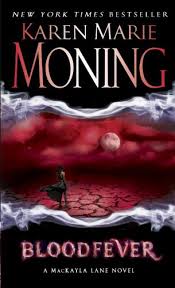 Welcome to the Bloodfever Discussion! Book two in Karen Marie Moning’s Fever series. In Bloodfever, we dive deeper into the dark streets of Ireland, and all the secrets they hold. Mac learns more about her past, and Barrons becomes more of a mystery. There is also a hot make-out session in a cave! Score!

Although there are two subsequent releases, we are going to pretend we have not read them and just focus on facts learned in Darkfever and Bloodfever so no one is spoiled!

Note: Direct quotes from the book are in italics.

● Legend has it there are multiple cuffs, each with a different purpose.

● Only royal castes can regenerate

● The Amulet – The Unseelie King himself fashioned that trinket; it’s one of the four Unseelie Hallows. At the end of the book, Lord Master ends up with it.

● The amulet is one of the gifts the Unseelie King fashioned for his favored concubine. She was not of his race and posessed no magic. He wished her to be able to weave illusions for her amusement, like the rest of his kind,

● Fae: Extreme longevity has an unfortunate and inescapalbe by-product:madness. When they feel it approaching, most choose to drink from the Seelie Hallow, the cauldron, and wipe their memories clean so they can start over. They retain nothing of their former existence and believe they are born the day they drink. There is a record – keeper; one who scribes the names of each incarnation each Fae has borne, and maintains a true history of their race.

● If a human person eats Unseelie flesh, they can see Fae, but then can’t touch the Hallows. They also have super-human strength.

● Silvers are one of the Unseelie Hallows. Most believe the first Dark Hallow the King created was a single mirror. A few of us know it was actually a vast network of mirrors, linking dimensions, before they evolved to the point where they could travel by thought alone, although some say they were created for a more personal purpose of the dark king’s that history failed to record. At some point in the Fae timeline, this Cruce we keep hearing about cursed the Silvers.

● "Dreamy-eyed guy" (who was at museum when she stripped) meets up with her by chance. (or is it?) He works at Ancient Languages Department at Trinity College (where Alina attended). When asked if he is irish he says "Little of this, little of that. Nothing special." (Mandi doesn’’t buy it!)

● Mac still convinced Lord Master killed Alina – Barrons points out marks on her were Fae, Lord Master is not Fae

● Mac confirms she is adopted. Her father says they had to promise that her nor Alina would ever enter Ireland.- her parents hit a dead end with locating her biological parents. Her adoptive father says he assumes her biological mother is dead.

● Barrons gives Mac a cell phone – His number, IYCGM (If You Can’t Get Me, which goes to Ryodan), IYD (If You’re Dying – at this point we don’t know who that calls) (whimper)

● Meets Dani, fellow sidhe seer – refers to a council overseeing them. She has super speed. She also can use the sword, although Rowena keeps that in her possession. Rowena (same woman Mac met twice in Darkfever) is head of sidhe seers – Grand Mistress.

● Supposedly I’m one of the most powerful sidhe-seers ever born. Not only can I see the Fae, I can sense their sacred relics that hold the deadliest and most powerful of their magic. I can find them. I can use them.

● Mac has the look of Fae – Patrona, who once presided over the council. She was killed by Fae.

● Barrons had tattooed Mac in Darkfever (to locate her).

● Barrons tells Mac there is a vault in his garage three floors beneath the floor. Mac has no idea what is in it. Later, when Mac breaks into the garage, she hears something “baying” and feels a rumble deep below.

● Barrons knows O’Duffy (the police inspector in charge of Alina’s case) is dead before Mac has a chance to tell him. We do not know who killed him.

● Barrons moved Alina’s stuff out of her apartment. He was her landlord but he claims didn’t know her. (Tori is not buying it.)

● Dani and Rowena say there is no such thing as a male sidhe seer – Barrons can see them though. Barrons is evasive when questioned by Mac.

● Mac calls the IYCGM button on cell phone. Meets Ryodan for first time. He alludes to Barrons being called many names through the years. Won’t tell her his real name.

● As Barrons and Mac kiss, she retrieves this memory from him: Alone in a desert beneath a blood-red moon. War everywhere. Always war. A breath-stealing sirocco sweeping down over treacherously sifting sands. A cave in a cliff wall. Sanctuary? No sanctuary left anywhere.

● V’Lane takes Mac to fairy for their one hour talk. In this incarnation he is 142,000 yrs old. Time in fairy does not correlate to time in the human realm. Mac gone for a few hours in fairy turns into a month on Earth.

● And you were such a sweet thing when you got here. Mac – How do you know what I was like when I got here?" I demanded. "How long have you been watching me?" V’lane says nothing.

● Later… We learned of you because we were watching Barrons. Your sister, who we’ve since become aware of, did not know Barrons.

● Mac was suppose to get a package from "Elle Masters" she is not there. Instead meets 4th yr student "Scotty" Later we find out his name is Christian. He is also a son of Drustan’s relatives that let him sleep for 500 years in the “Kiss of the Highlander.”

● When Mac meets Christian MacKelter officially, she lets him see her journal. He knew Alina.That is all we know at this point.

Barrons Quotes That Make Us Do a Dirty Swoon:

"Perhaps it depends on the man doing the owning."

"I doubt it. I couldn’t breathe with him kissing me."

"One day you may kiss a man you can’t breathe without, and find breath is of little consequence." (Kiss me Barrons!)

● Nice tan, Ms. Lane. So where the fuck have you been for the past month?

● Yes, I have loved, Ms. Lane, and although it’s none of your business, I have lost. Many things. And no, I am not like any other player in this game and I will never be like V’lane, and I get a hard-on a great deal more than occasionally.

● “Whether I see the Fae, or whether I’m a man. I believe I’ve laid your mind to rest on the former;shall I relieve it on the latter?" He reached for his belt. "Oh, please." I rolled my eyes. "You’re a leftie Barrons." "Touche, Ms. Lane," he murmured. (<–Mandi’s FAVORITE Quote)

● "He told me you weren’t coming." Barrons-"And you believed him? No don’t answer that. I said don’t talk. Just be still. Fuck. Mac. Fuck."

● I know you’re the ones with boobs! They’re in my fucking face every fucking time I turn around!

● I’ll bring it on, Ms. Lane. But remember you asked for it.

Mac Meter – Her Progression from Rainbow Girl to Savage Mac

● Well done, Ms. Lane. Just when I think you’re all useless fluff and nails, you show me some teeth.

● My only fashion concern was making sure my clothes were baggy enough to accommodate weapons concealed beneath them.

● Inside me was a Mac I’d never met before. I couldn’t dress her up. I couldn’t make her take a bath. She wouldn’t mix in pleasant society. I couldn’t corral a single one of her thoughts. My only hope was she wouldn’t suddenly sprout a mouth. She was a bloodthirsty, primitive little savage. And she hated pink.

● That savage Mac inside me still hadn’t found an audible voice, still wasn’t speaking with my tongue, but we spoke the same language, she and I, and agreed on critical things. We would kill my sister’s killer together.

● Savage Mac was squatting in the dirt, stabbing her spear into the ground, nodding and saying, Yesss, finally, some real power! Bring it on!

● I didn’t say, You are such a stuffy asshole. And he didn’t say, If you ever burn one of my quarter-of-a-million dollar rugs again I’ll take it out of your hide. And II didn’t say, Oh, honey, wouldn’t you like to? And he didn’t say Grow up, Ms. Lane, I don’t take little girls to my bed. And I didn’t say I wouldn’t go there if it was the only safe place from the Lord Master in all of Dublin. “You might reconsider that one day.” His voice was low, fierce, on the verge of guttural. I gasped. “What?” Intrinsic to our wordless free-for-alls was a tacit agreement never to elevate those conversations to a verbal level. It was the only reason either of us was willing to participate.

Clearly Barrons wants Mac. (Jealously, hard-ons etc.) Why does he fight it?

What about Christian MacKeltar? Based on what we know about the MacKeltars from the Highlander series, what do we think he is up to?

Mac learns of Rowena and her many fellow sidhe-seers. She has the opportunity to join with them – but eventually refuses. Is her mistrust well placed? Barrons has proven he wants her alive, but he is also very evasive. Who do you trust?

At the end of the book, the Lord Master simply walks away from Barrons, after Barrons demands Mac stay with him. What is the Lord Master’s place in all of this? He is not Fae, but doesn’t necessarily fear Barrons.

The next two books end with cliffhangers that will give you an ulcer! Faefever will be discussed 12/20 (slight change of date) See you there!