You are here: Home / interview / Interview with Nalini Singh and Giveaway

Hi Nalini and welcome to Smexy Books! For those who may not know much about you, give us a little background about yourself.

I live in gorgeous New Zealand, and write the Psy/Changeling and Guild Hunter series for Berkley Sensation. I’m also addicted to chocolate and travel.

For excerpts, behind-the-scenes info, and free short stories, check out my website: www.nalinisingh.com

In your newest Psy-Changeling novel, Kiss Of Snow, you match a rather young Psy, Sienna who is 19, with a much older and very dominant Alpha, Hawke. What brought this May-December romance to light?

The instant, the instant, these two appeared on the page together, that was it. The intensity of the response they incited in one another, even if it was anger and frustration, was palpable, and I knew it was the start of an explosive, compelling, and perhaps painful emotional journey.

The age difference was daunting, but trying to force them into relationships with more “suitable” people just wouldn’t have worked. It was always going to be Hawke and Sienna.

The character guide at the beginning of the book is a great reference now that so many characters fill your world. Is it challenging coming up with names? Do you have a process you go through when you choose a new name, or do they just pop in your head?

It depends on the character – sometimes, the name appears with the character, while other times, it may take me days to find the right name. I’d rather write with a placeholder than use the wrong name in a manuscript. Often, I get the feeling that I ‘know’ the name already…I just have to find it. When I do, it clicks into place.

The one thing that I have learned to do as the series progresses it to keep an alphabetical list of all the names – this stops me from ending up with two names that sound similar.

Here at Smexy, we have been following the Ghost like a “Hawke”(we crack ourselves up). We’ve got to know. When will we see who Ghost is? Can you give us a hint?

My lips are zipped.  However, I think you’ll see more of the Ghost in the next Psy/Changeling book, so you’ll have more material to work with re the rebel’s identity.

Hawke definitely falls outside the Twitter demographic – I believe the words “I’d rather gnaw off my own foot” might be used if he was asked to set up an account. Drew on the other hand, yes, he might just do it.

Walker and Lauren get their own very smexy romance in this one. Will we be seeing more of these side-story romances in future books?

Yes, that’s a strong possibility – however, it all depends on the needs of the particular story. I’m also considering writing a novella featuring Walker and Lara, though that hasn’t yet been finalized.

How do you celebrate release days? Anything special planned for the day Kiss of Snow comes out?

I’m actually going to be on book tour when Kiss of Snow releases, and at an event with readers, which I think is fantastic!

Your next Guild book, Archangel’s Blade will be Dmitri’s story. How did it feel not writing with Raphael and Elena as central characters? Is Dmitri surprising you in any way?

I think it was the right time to write this story. Elena and Raphael were in a good place at the end of ARCHANGEL’S CONSORT, and so it didn’t feel as if I was leaving them abruptly. And we do see them in ARCHANGEL’S BLADE – Dmitri’s book is part of the overall continuity of the series.

As for Dmitri – I’ve always known there are depths to him that weren’t revealed in books one through three. I also knew something very specific about his past that has always given me a unique perspective on him – when that past is revealed in his book, I think it may have the same effect on readers.

Who do we see from your series in your upcoming anthology-Angels of Darkness?

Currently titled Angel’s Wolf, the novella features Noel, the vampire who was brutally tortured in ARCHANGEL’S KISS, and an angel who was fleetingly mentioned in ARCHANGEL’S CONSORT – Nimra. The setting is Nimra’s Louisiana home, gracious, lush and beautiful…and full of deadly secrets.

Every Friday on your blog, you do your Friday Book Club, where you ask readers to tell you what books they are loving at the moment. What are some of your favorite books?

I have so many favorites across so many different genres! Here are just some of the books I adore:

The In Death series by JD Robb, A Secret Love by Stephanie Laurens (I absolutely melt over the declaration of love in this book), Dangerous by Amanda Quick, The Time is Short by Nerina Hilliard, The Iron Duke by Meljean Brook (a new favorite), Anne McCaffrey’s Dragonriders of Pern series, Mercedes Lackey’s Heralds of Valdemar books, Patricia Briggs’ Mercy Thompson books, Ilona Andrews’ two series, and…I could just go on and on!

Thanks Nalini for being here today!

Thanks for having me. =) 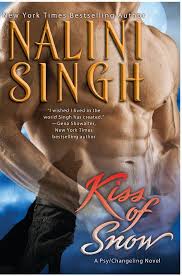 We happen to have a brand new copy of Kiss of Snow to giveaway today!

Contest is open to everyone (international)  through May 29th. Just leave a comment to enter.