You are here: Home / A Review / Review: Dragon Bound by Thea Harrison 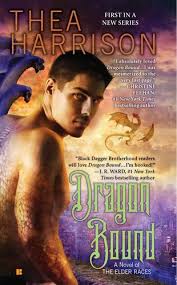 Favorite Quote: “There’s my bad boy,” she whispered. God, he was breathtaking.

I read a lot of books. I read a lot of paranormal books. So when one comes into the Smexy household that is exciting, refreshing and just all around awesome, it is cause for celebration!

Dragon Bound by Thea Harrison is the first book in the Elder Races series. Our hero, Dragos Cuelebre is of the Wyr, a group of powerful, ancient shapeshifters. Dragos more specifically is a  rare dragon-shifter created around the time of the solar system – so yes, he is ancient to say the least. In present day he is head of the Wyr demesnes located in New York city. The other six demesnes, including Elven, Fae etc…reside in other parts of the United States. He is extremely powerful, wealthy and demands loyalty and obedience from everyone in his control. So when someone breaks into his hoard, something that has never happened before and steals from him, his anger as he takes to the sky in his dragon form can literally be felt and heard from everyone in the city.

Pia Giovanni is a half-breed – half human, half wyr. Raised by her mother who embedded in her mind to never tell anyone what her half-wyr side is, she has always been on the run. But now she has herself in a bit of a bind. She let her guard down with her ex-boyfriend Keith and revealed to him a bit about herself. Something she has never done with another before. Then Keith turned out to be a jerk and to cover his gambling debts, is now blackmailing her with this secret information about herself. He hands over to her a finding charm which with her special powers leads her directly into Dragos’ hoard and demands that she steal something from Dragos to appease his “associates.” She gets in and steals one of his pennies.

When Dragos discovers this theft, he makes it his mission to find who did this. But soon, they both realize there is a bigger player at stake. The Dark Fae King and Dragos have bad blood and a war is on the horizon.

When we first meet Dragos, he reminded me very much of Raphael from Nalini Singh’s Guild Hunter series. He is extremely powerful, intense, dark and just a bad ass. But Dragos soon comes into his own. He has been around since the beginning of time, yet some modern things still confuse him. Like slurpees and twizzlers. But don’t let that trick you because he runs one of the biggest corporations in the world. Cuelebre Towers employees thousands of people and he rules with a strict hand. But his dragon side also rules his actions throughout this book -  something Pia must come to terms with:

Something very light tickled her forearms that covered the back of her head. It whuffled in her hair.

She scratched an arm. “Did you kill the Fae horses?”

The whuffling stopped. Dragos said in a cautious voice, “Was I not supposed to?”

She shrugged. “It just wasn’t their fault.”

“If it helps any, I was hungry and ate one.” Another whuffle.

When Dragos finally tracks down Pia, his anger soon turns to fascination. He quickly discovers her sticky situation with being blackmailed and realizes a bigger player is calling the shots. He finds himself no longer bored, and very physically attracted to this half breed.

Pia is a really great heroine. Strong, outspoken, and stands up to the over-bearing Dragos. He is kind of a “caveman” when it comes to romance. He isn’t suave, or charming. He expects her to follow his orders when it comes to her safety but also in the romance department. But as Pia comes to mean more to him, he wants to learn to be a better lover. I love how we are constantly reminded of how powerful and old he really is:

“You are never to do that again,” he said between his teeth. “Do you understand?”

“Dragos,” she said, speaking with care because he was still so upset. “You’ve got to stop giving me orders.”

No matter how gently she said it, it was still like a spark to dry tinder.

“Fuck you,” he snapped. He thrust his face down to hers, eyes flaring to lava and features hardening.  “You’re mine. And you. Can’t. Leave.”

“Whoa, there. I don’t know what to say to you. You’re like some stalker guy on steroids.” She threw back her hands and rolled her eyes. “You are aware, aren’t you, that you can’t have slaves any longer. You know, abolition. Big war. Happened a hundred and forty, forty-five years ago.”

“Human history, human terms,” he snarled. “They mean nothing to me.”

Pia is strong-willed and butts heads with him about this behavior on many occasions. But there is also humor and warmth in their relationship. Their romance is a quick one in this book – I believe the entire book takes place over about five days. Which I know seems crazy, but it is totally believable. Dragos has the “mine” concept from very early on, and Pia herself desperate not to be lonely in life, falls for him just as quickly.

“Thief or not, she is mine and I’m keeping her. If a single hair on that young woman’s head is harmed, you four bastards better be slaughtered and in pieces when I find you.”

Oh yes, Dragos is that much of a bad ass.

The writing is just superb. There are a few scenes where the action is violent and rough that just made my hair stand on end. Chapter seven holds my absolute favorite scene in the book. Dragos and Pia have been captured and Dragos knows he can’t immediately get them out of harms way. For such a powerful, irate being having to tell this woman who he has started to have protective feelings for that she is going to get hurt, was really amazing to read. You can feel the fear coming off Pia. A brief moment from this chapter:

“Here’s what I think is going to happen. They’re going to separate us. They might hurt you.” His grip tightened to the point of pain. “They won’t kill you. They’ll have seen I was tending to you in some way, so they’ll want to use you as leverage to control me. Goblins have no interest in human women. They’ won’t rape you.”

A spasm of trembling hit her, and then it was gone again and she was calm. “It’s all right,” she told him. “I’m all right. I’m glad you’re telling me this.”

What follows is a terribly violent, emotionally filled chapter that just blew me away.

This world is really fantastic – exciting, very sexy and humorous. Fans of paranormal romance must read this book.