You are here: Home / A Review / Guest Review: New York to Dallas by J.D. Robb 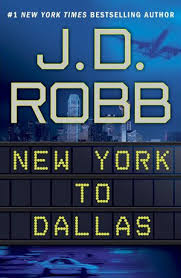 In sticking with tradition, Claire, aka sparklybearsy aka Roarke lover is back with a guest review of the latest In Death book!

When a fresh faced rookie cop, Eve Dallas, stumbled upon a sick twisted pedophile murderer while investigating another crime, she didn’t think 12 years later she’d have to track him down again. And in the city she loathed and didn’t want to go back to.

New York to Dallas sees Eve, Roarke and her team split into two groups in both cities, trying to find prison escapee Isaac McQueen before his sick games kill another child. He’s smart and has Eve not only two steps behind him at all times, but makes her face memories she’d rather forget.

First, thanks of the giant kind to Mandi for giving me the hook up once more with my Roarke fix. You’re made of awesome-sauce!

Going into reading New York to Dallas I had some anxious moments, as a super fan of the series I can never resist reading reviews, something I don’t usually do for any other book until I’ve read it. And while the reviews were mixed the same underline theme ran through them all: Was the end in sight for Eve, Roarke and series?

Eek! While I won’t give much away plot wise I will say a lot of threads do get tied up in this installment of the In Death series.

First we see a change in title for the first time in the entire series, once you read the book you understood why that’s significant and also necessary. I don’t think it’s a hidden clue for Robb to put it to bed, it was just more dramatic for the characters and plot for this one book to have a title change from its usual "…..In Death" I for one liked it. (Hey, i can get on board with change. Sometimes. Maybe. heh)

Major brain power is needed to catch this guy, and Eve uses all her resources to its fullest. It’s not overly action packed as you’d expect from some In Deaths but what it lacks in action makes up for in every other avenue. The connection with Eve and Roarke which I just lurveee is still very much present. Oh gosh I do love this pair, and for a series that is not romance based, the mushy parts we do get always leave me feeling good. I don’t know how Robb does it but she can make even the most gruesome scene loving with just a few words from Roarke and Eve. Love!

Shocking revelations had me engrossed. As you’d expect, Dallas isn’t a city Eve has any good memories from, and experiencing her reliving them is always heartbreaking, as she tries so hard to keep her tough exterior yet she feels everything so deeply. She has guilt over the crime victims which play out in her nightmares that always leave Eve a little unfocused for a while, until she pulls herself back together both facing her ugly past and catching a bad guy. I love that about her, whatever gets in her way she just kicks it in the balls and says "I’m Lieutenant Eve Dallas and you wont break me, bitch!" Okay, she doesn’t say that exactly, but I imagine she does *grins*

Quotes I love from Roarke to Eve:

"I do so completely adore you, and your chauvinistic New York mind"

"Why do you do that? Push and order and threaten"

"Because you’re in pain, and too much of a bloody mule to admit it.  Because I’m in the often maddening position of loving you beyond all reason, so you can infuriate and rip me to pieces at the same time. Now take the fucking pill."

"You could never be nothing." Roarke spoke in a voice of barely controlled rage. "You’re what you made yourself against the impossible.

Even when you were helpless they couldn’t destroy what you are. You’re a miracle.  You’re my miracle and you’ll never be anything else"

Sigh. See why I love him so?

I’ve said it before but I will say it again, these are two characters that never grow stale, the author digs deep each book and delivers not only ingenious crimes that never feel repeated but a leading hero and heroine that continue to grow and develop making you want to see more of them.

I missed Summerset in this book and STILL the candy thief is not revealed! ( proof that the series is NOT ending. Ha! ) that’s the only two things I had pause with, because New York to Dallas is a true masterpiece in this series and is now one of my favorites. I was hooked from word one until the very end. It’s a MUST read for all In Death fans, if only to see MY Book Boyfriend Roarke.

I give New York to Dallas top marks. 5 sparkles out of 5!