You are here: Home / B Review / Review: Spider’s Revenge by Jennifer Estep 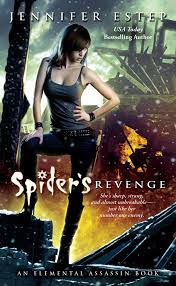 Favorite Quote: “For a moment I…cursed luck; that fickle, fickle bitch who’d screwed me over again.”

The fifth installment in Jennifer Estep’s Elemental Assassins series is an action packed no holds barred story that starts with a bang and keeps you riding the edge until the very end. Gin has reached the pentacle of her obsession; Mab Monroe will die. The only question now is how. During a failed assassination attempt, Gin learns that Mab has hired a slew of bounty hunters by placing an extremely high price of Gin and her sister Bria’s head. Gin isn’t without her own resources but she knows this will be a battle of magic and she is still uneasy about her ice and stone magic.

I am a HUGE fan of Ms. Estep. Since the first in the series, Spider’s Bite, I have found myself an addict to her characters and the dark violent world in which they live in. A strong character driven series, Estep has created a formidable well plotted cast, especially in her heroine, Gin Blanco. Orphaned at a young age and raised by an assassin, she has trained and plotted for the moment she can kill the one person who started it all. Mab Monroe, a powerful fire elemental who’s jealousy and fear drove her to destroy Gin’s life.

Gin is a chameleon who can blend into any situation and you never seen her coming till the very last moment. She is a mild mannered restaurant owner yet with the flick of a knife, she becomes a silent unstoppable killer. She has spent her life committing acts of violence for money. She has made some questionable choices in the past and committed unspeakable acts, yet she makes no excuses for her past. She is what she is. Though a loner by nature, she has friends and family who love her and now a lover who knows and accepts what she is.

I love that the secondary characters are as indelible and vibrant as our protagonist. Each one is a vital part of the storyline and over all arc. Finn is the other half of Gin. He took over as her handler when his father Fletcher died. His love of money, power, and coffee endears him to me.

Jojo and Sophia Deveraux protect Gin far more then she realizes. I like that we finally get Sophia’s back story in here. It’s very enlightening. Owen, Roslyn, and Xaviar also feature stronger in here in that they aren’t on the receiving end of Gin’s talents this time around but going on the offensive with her. Gin and Owen’s relationship has developed so much in the last few books that I have fallen in love with them both as a couple. Gin needs someone strong and secure enough in themselves to accept who and what she is and Owen does that in spades. It also helps that the man is muy sexy and the chemistry between them is pretty scorching for an Urban Fantasy.

“My gaze lingered on his chiseled features-the scar that slashed across his chin, the crooked quirk of his nose, the intense violet of his eyes. All things that made Owen go from merely sexy to heartstoppingly devastating. Owen starred at me, and I looked back at him. Emotion sparked and shimmered between us. Heat. Desire. Need. Longing.”

Some interesting new characters are introduced that keep you wondering till the very end. I hope we will see them again before this series ends.

Suspense and taunt action vibrate through the story as we take the final steps, with Gin, towards her destiny. While I found this storyline as enjoyable as the others, it is a bit slower in places as we spend more time in Gin’s head, party to her inner most fears and desires. She knows going up against Mab will be hard and possibly fatal. She is also being more honest to herself about her feelings towards Owen. I like that Ms. Estep doesn’t gloss over any of fit and realistically makes Gin nervous and scared. Not to say that Gin doesn’t get to bat in here because she does and with a vengeance. Ms. Estep has a gift in facilitating a perfect descriptive balance between action and the emotions in a fight scene. I did feel that the food descriptions became more repetitious this go around yet it makes sense because when Gin is nervous or scared-she cooks.

The ending comes at you hard and fast; a whirlwind of tension, intrigue and mind blowing action that leaves your heart pounding. Ms. Estep doesn’t pull any punches here and you aren’t sure of anything till she tells you it’s alright. Spider’s Revenge is a worthy conclusion to the long running arc. I recommend this series to anyone who enjoys a noir gritty Urban Fantasy whose characters and world will cement themselves in your mind and heart. I look forward to book six, By A Thread, which is set to release February 2012.