You are here: Home / C Review / Review: The Next Always by Nora Roberts 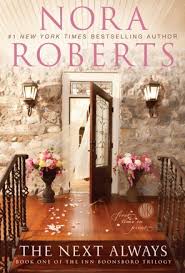 Beckett Montgomery along with his brothers Ryder and Owen all work together at their family owned business, Montgomery Family Contractors. Along with their mother, they have purchased a dilapidated inn in western Maryland and have been putting 100% effort into making it an amazing bed and breakfast. But it still needs a lot of work. Beckett is the architect of the group, and is very busy with all the plans.

Clare Brewster owns a cute little bookstore, right across from the Inn. She is a widow, having lost her husband five years ago in Iraq. After his death, she moved back to her hometown. She has three young boys and throw on working full time and being a single parent, she is very busy. Beckett has always had a little crush on Clare since high school. Recently they’ve been dancing around each other as they are both in the right place in their lives to try out this dating thing.

The Next Always is the first in a new trilogy that follows along the Montgomery brothers. This book is heavy on the details of remodeling the inn. It really paints a picture in your head of what this old inn will eventually look like – although I do think these details really slow down the story. We also get much page time devoted to the residents of this small Maryland town. Beckett’s brothers Ryder and Owen work together, and also give each other a hard time throughout most of the book. Their heroines are quietly hinted at – enough that will make you interested to pick up each of their books. Clare’s friends are there to support her as she tries to raise three rowdy boys – and give her some sense of sanity. There is a nice small town feel to this book.

With that said, I do think the romance falls a little flat. Partly because Beckett and Clare just don’t have a lot of page time together. I thought it felt realistic that their romance is impeded by Clare’s kids and both of their hectic schedules, but I wanted to see them fall in love more than we do. I like that Clare pushes for the relationship and they have a very easy going feel to it all. But I think we miss some of the more intimate moments where they go from “hey let’s try dating” to the “I want this to be serious.”

Also Clare is being stalked by this man she knows. She keeps it to herself for awhile (at first it really isn’t that big of a deal) but as the story progresses, this stalker become a little more – persistent. The stalker storyline didn’t really do much for me, but at the end it does come down to a big moment, and this is where I lost a little respect for this book.

Throughout the book there is a ghost, which, I don’t love ghosts in my contemporary romances, but I get that this is an old inn, so I went with it. Beckett becomes more involved with the ghost – talking to her (to himself really). Sometimes a door in a certain room would open or close. But at the very end the ghost does something that really weakens the plot. Almost like it was an easy out to get the heroine out of trouble. I was really disappointed by this and it made me roll my eyes.

Overall, this book is just okay for me. It is cute, but a little slow at times. I wish the romance was focused on a little more, but I liked both hero and heroine. And as I said above, I did not like the ghost aspect at all.