10. My Week – I went to the eye dr and learned my right eye is now worse than my left – which means I need to keep track of my contacts when I take them out at night. This doesn’t bode well for me. I’m not known to take very good care of my contacts. But on a positive note – wow, I can see again!

9. Okay, so not the best cover ever but let’s just move on because this is one of my favorite series. Fish & Chips is book three of Madeleine Urban and Abigail Roux’s Cut & Run series. And OMG this book. This series follows two FBI agents, Ty Grady and Zane Garrett. In book one, they reluctantly become FBI partners (they pretty much hate each other) and about halfway through book one, they reluctantly become lovers (they still kind of hate each other). They are both very alpha, and cranky. Zane used to be married and Ty occasionally sleeps with women…but they are physically attracted to each other. There is no foreplay involved here – just intense…..smexin’ . But that is all in book one.

By Fish & Chips, they have admitted to themselves, they love the other. Of course, they are both too emotionally immature to admit it to each other. At least at the beginning of this book. But their relationship really grows in this one. And there is a sex scene towards the end (okay right around 63% – of course I memorized the Kindle %) that is one of the hottest scenes I have read. Probably because their relationship has been building up throughout these three books. It made the scene that much more – intense.

Today, book four, Divide & Conquer is out!!! I’m so excited!! I highly recommend this series. I will say the first two books, while there is hot smexin’ they are heavy on suspense (each book has a new suspense/fbi assignment). But their sarcastic banter, and the way these authors have allowed their relationship to grow through each book is really something great. They each have such huge insecurities, and to watch them come to trust the other, is so romantic. And like I said, you are going to want to start with book one, Cut & Run.

8. Gena Showalter news! Yesterday, the cover for The Darkest Seduction (out on 2/21/12) was released! This will be Paris and Sienna’s story. A few other things revealed – Might be spoilery….

– Ashlyn gives birth in Paris’s book. Has a boy, named Urban, and girl, Ever!

Also, she announced a spin-off series, Angels of the Dark. The first book is called, Wicked Night and will feature  Zacharel.  I’m not sure if a release date has been announced.

For a more complete wrap up, head over to Hanging With Bells.

7. Tessa Dare has announced that she is releasing a Spindle Cove e-novella called, Once Upon a Winter’s Eve with Samhian releasing November 15th. And Thea Harrison has similar news. She will be releasing a novella with Samhain in her Elder Races world called True Colors. That is coming out December 13th. Yay for Samhain!

6. Cover Alert! Hot in Handcuffs Anthology….coming next July. So we only have 9 months to wait. I enjoy the pink handcuffs by the way ;)

Another Cover Alert! AHHH!!! The final book in Carolyn Crane’s trilogy – Head Rush – coming out this December with Samhain. Love, love, love this urban fantasy series. As I’ve said before, you must read these in order – Mind Games and Double Cross are the first two. So excited to finally see how this series plays out!

Also – Justine is finally not holding a knife on the cover! Which never made any sense to me. This one is much better.

5. Charlaine Harris has announced after her last Sookie book comes out (in 2013) she is going to start a graphic novel trilogy called Cemetery Girl.  It will “combine fantasy and paranormal mystery to tell the story of a teenaged girl with amnesia who has grown up living alone in amid the gravestones.” I don’t know, this doesn’t seem like my kind of thing, but who knows. Via Heroes & Heartbreakers.

Something Different by S.A. Reid – m/m romance, $.99 Kindle, Nook. This was reviewed at Dear Author earlier this week very favorably.

Heating Up the Kitchen by Jill Shalvis, is a recipe book that coincides with her Lucky Harbor series. It is free! Kindle, Nook.

Holiday Sparks by Shannon Stacey – contemporary, $1.99 Kindle, Nook. This is a super cute novella. I really enjoyed it last year. 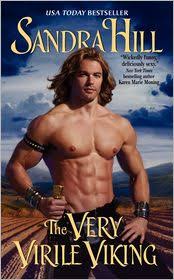 . The Very Virile Viking by Sandra Hill is being reissued on 10/25. Is the new cover (above) better than the first one, that came out in 2003?

I’m not sure. (He may be very virile, but dude needs new hair)  But for some reason this book is calling to me. Could it be the blurb?

Magnus Ericsson is a simple man. He loves the smell of fresh-turned dirt after springtime plowing. He loves the feel of a soft woman under him in the bed furs. He loves the heft of a good sword in his fighting arm.

But, Holy Thor, what he does not relish is the bothersome brood of children he’s been saddled with. Or the mysterious happenstance that strands him in a strange new land— the kingdom of Holly Wood. Here is a place where the folks think he is an act-whore (whatever that is), and the woman of his dreams—a winemaker of all things—fails to accept that he is her soul mate, a man of exceptional talents, not to mention . . . a very virile viking

I love this blurb so much. It may be fantastically cheesy, but it sounds amusing as well. Have any of you read it?? Am I in for an over the top viking? Tweeter, @fshk sent me this link, which is an amusing take on the book.

I’ll crack it open soon and see how Very Virile this Viking can be.

2. Romance at Random put out a list of the romance books coming out from now through the end of December. It is so pretty and sparkly. Let’s go stare at it for a few hours.

1. I leave you with a shirtless man of steel. The muscles, the chest…Smexy is in love with Henry “Superman” Cavill. (Thanks @RedHotBooks)