10. We have lots to get to in the Top Ten today. But first let’s take a moment to mentally make out with Tom Hardy……

9. The Ghost (aka Nalini Singh and her Psy/Changeling series) took over Twitter last night to tease us and give us some hints regarding the upcoming Heart of Obsidian. I’m DYING for this book. One of my favorite series. The transcript of the Twitter chat is available here. Kat also does a nice recap here. The second to last sentence in Kat’s recap made me squee.

8. Captive Prince Vol One and Two by SU Pacat (Vol 3 not out yet) are probably my favorite reads so far this year. It’s a m/m fantasy series which I reviewed here. Vol one is good, Vol two will blow you away. The author weaves an amazing world and romance.. It was announced yesterday that Berkley (aka Penguin) is picking up this series and will be releasing the entire trilogy. This excites me so much. First, this means they will be publishing a m/m romance which I always love to see. But this author’s voice is so, so good – and if this means more and more people will discover her than that can only be good news.

If you don’t want to wait for them to be released through Penguin, they are available now.

7. Two quick pieces of book news. Sylvia Day has released the cover to her August release, Afterburn. It will be part of the Cosmo Red Hot Reads line. You can read the blurb here.  Amazon has it up for preorder for $3.03 right now.

Also, Abigail Roux has just announced that Cut & Run #8 (aka Ty and Zane aka my favorite boys ever) will be titled Ball & Chain. Per Goodreads, it will release March 17, 2014.

6. Forget Match.com or eHarmony to find a guy online. Because ladies – there is now a dating site called, Meet a Cowboy. This is for real. From their site:

Do you have fantasies about a hot and sexy cowboy who comes on his trusty steed, sits you on its saddle and takes you away with him into a sunset? Of course you do! Almost every little girl who has ever seen a cowboy movie, wanted to have a boyfriend who will be just as handsome as those guys. And now, when all of us have grown up, some things just didn’t change. Still, there are a lot of women out there who are more than eager to meet a cowboy from their teenage fantasies. Luckily, these cowboys exist in real life as well, and not only that! They are not just real, but they are also single and more than willing to date girls who will love them for being just the way they are. And our site is just the right place to pair up single girls and single cowboys from all over.

The big question is – will you get a date like this? 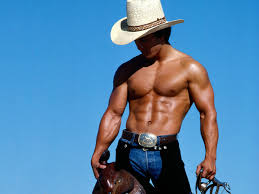 Good luck and giddy up.

5. So Prince Harry has always been my go-to prince. Right? Duh. He is hot, and feisty and I’m sure he is good in bed. (Those are the only requirements of a prince, yes? YES!)

But there is a “new to me” prince that is trying to edge his way into my dirty prince fantasies. Prince Carl Phillip of Sweden.

But then I see this pic and I’m all like – squinting, cringing, eh no.

But then I see THIS pic and I’m all like – OOOOOOH.

So pick your prince. I say Harry could take Carl down easy…but maybe they could have a hot bromance too. Man, lusting after these Princes is TOUGH. I hope they realize this. *wink*

4. Here you go Gandy lovers. 7 minutes with your man. He comes across kind of shy. Which is totally endearing. I also think he is the only man that can talk about sitting on the loo, and it’s still hot. If my husband started off a story – well I was sitting on the toilet, I would immediately leave the room. But with Gandy I was like – THEN WHAT?  (there is also a part 2. Thanks Claudia!)

3. I’m not saying it’s necessarily time to panic but I’m totally panicking. According to this article in the NY Times, the trend for advertising male underwear may be changing. Two alarming quotes:

#1 – “We are giving the models an identity, so they are not just a piece of meat.”

WHAT IS THIS NONSENSE?

2. A few nights ago I saw Nat post a link to this website that showed people with “cat beards” – where you take your poor cat and arrange it so it looks like you have a beard with cat hair. Do you get it?

Being as it was at night and I was tired, I started giggling uncontrollably. Then my husband grabbed our cat and tried to force him into this position. Which is a lot harder than it looks! Especially when you can’t stop laughing!

This is me about one second before I snort-laughed all over my cats head. I’m sorry Oscar. Not really.

1. Three day weekend!! I’m excited. I have plans to read, eat burgers and take the kids to see Epic. I also hear rumors of a three-lane slip n slide that will appear at the memorial day party we are going to. I love me a slip n slide race. Happy Friday!