You are here: Home / A Review / Review: Savage Nature by Christine Feehan 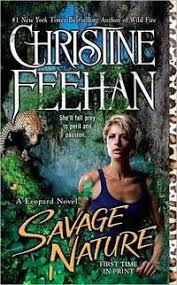 Favorite Quote: “I think my leopard is a freakin’ hussy!”

A heady passionate seductive story filled with romance, suspense, and my favorite…shapeshifters. Rowr!!! I’ve waited for Drake’s story and I’m pleased to say that I feel this is the best one in the series. Feehan blends a sweet and steamy love story with action packed tension that kept me glued to the pages. Each are given adequate attention without either overpowering the other.

Drake Donovan comes to the bayou of Louisiana after a mysterious letter is received by his boss, Jake Banniconni (Burning Wild), hinting at men being killed on his land by shifters. When Drake arrives he meets Saria Bouderaux. A guide for hire, Saria agrees to take Drake through the swamps. Drake is stunned to see that not only is Saria a leopard shifter but his leopard feels she is his mate. She is also entering the Han Vol Dame-meaning she’s going into heat. Drake realizes that Saria has no idea that her leopard is about to emerge so he tries his best to prepare her for the transformation. As Drake romances and prepares Saria for what is to come, they are also investigating the situation. Drake realizes that the lair that claims this bayou as their own is inherently wrong. Inbreeding and overly aggressive males has Drake fighting for dominance and Saria’s safety.

I really like Drake and Saria. While Drake is a commanding alpha, he’s not dominant to the point of being unlikable. He’s also not given to speaking the “creepy” dialogue that some of Feehan’s men seem to suffer from. Drake is very tender and caring about Saria; especially when he realizes she has no clue to what is going on with her body. He makes sure she knows and willing accepts what he is trying to offer her. No forced seduction here.

Saria was born and bred in the bayou. Practically raising herself due to her absent brothers and an alcoholic father, she is very independent, intelligent, and self reliant. She has a healthy respect for the bayou and it’s threats and it shows in her actions. She shows a great deal of intelligence when dealing with Drake. She knows she is attracted to him but realizes that she needs to think all this through. She just doesn’t accept the “mating” issue but she also doesn’t try to be coy about her feelings for him. There is plenty of humorous dialogue between Drake and Saria as she fights to control her leopard and her leopard’s “hussy” ways.

Feehan lets their romance build slowly over the course of the story and it creates such a passionate seductive storyline. There are some scenes in here between them that will have you wondering if it’s at all possible to read this while taking a cold shower.

Our secondary characters are just as robust and full bodied as our protagonists. They provide some humorous scenes and keep the storyline right on target and moving swiftly. We see some old friends from previous books and meet some new ones. Saria’s brothers are all major players in here and I cannot wait to read their stories; especially Remy’s. Our villain(s) are many yet we slowly check off each one as we gravitate towards the ending. The lair in the bayou is rotten and you can smell the evil that fosters it. Feehan does a wonderful job of keeping you misdirected and wondering as we sort through the lies and deception to arrive at the core of the problem.

The ending is wonderfully fraught with tension and suspense. Ms. Feehan does a fantastic job of building up to the climax for a smashing finale that leaves you breathless and satisfied. I truly enjoyed this story and I recommend this series to everyone who enjoys an action packed suspense filled sexy shifter PNR. I will certainly be looking forward to the 6th Leopard People’s story- to be announced at a later date.