You are here: Home / A Review / Review: Bayou Moon by Ilona Andrews 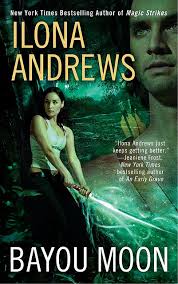 Favorite Quote: Every handsome man had a flaw. It was just her luck that in William’s case that flaw was lunacy. The man was nuts.

Cerise Mar lives in the Edge. A place between the Broken – where you and I live and the Weird – where the people with magic live. The Edgers, as they are called, have some magic and are mostly poor and spend their time feuding with each other. Some from the Edge can cross into the Broken or the Weird, others who have too much magic, can not make the cross and spend their entire lives in the in between. Cerise lives in the Mire – a swamp filled place where sogginess rules and where Louisiana dumps all of their criminals. Her family owns a big part of the swamplands between the state of Louisiana and the Weird. They have been feuding with a neighboring family, the Sheeriles for many, many years. After Cerise’s parents go missing, Cerise discovers the Sheeriles have overtaken her grandparent’s house and may have had something to do with her parents disappearance. Cerise is desperate to get her parents back, and will fight this feud with everything she has. She first needs to make her way into the Broken to retrieve documents to prove that house belongs to her family.

William is a changeling from the Weird. Changelings are feared and frowned upon in the Weird and his mother gave him up when he was one day old. Growing up at Hawk Academy, an orphanage of sorts for changelings, he was never nurtured, learned to fight, and grew up under very oppressive circumstances. William has spent much of his adult life searching and fighting with Spider. Spider works for the Hand, a secret organization that has magically transformed soldiers, all very creepy and evil. They are never the hunted, the always are the hunter. Spider has killed eight changeling children and William wants him punished. He has fought him twice, and they both limped away. William wants a third and final time with him.

Because William survived his fight against Spider, the Dukedom of Louisiana’s rival territory, Adrianglia wants William to sneak in find out what magical object Spider and his crew are searching for in the Mire. It is when both William and Cerise are trying to get back to the Mire that they meet. Cerise quickly realizes William is a deadly fighter, and William learns Cerise is no slouch with the sword either. Together they find their goals interweave and they start their journey togther.

Many are familiar with Ilona Andrews’ Kate Daniel series where they give us the very sexy Curran and wonderful heroine Kate. Last year, they started a new series, with the book On The Edge. We first meet William in this book, and what a great character he is. Growing up in such an oppressive orphanage, he doesn’t know how to interact with people. It doesn’t help that he is a changeling and the wolf seems to rule his mind for the most part. He doesn’t get sarcasm, or jokes. He is very territorial and he kills with absolutely no remorse. He was taught by violent methods the difference between right and wrong, but he often has to remind himself, or think back to his training before proceeding with something. Grace and social skills does not come naturally to him. What does come quite naturally is his feelings for Cerise. He doesn’t have a lot of experience with women wanting him, so he doesn’t recognize her desire. He has that “want” and “mine” thing going on in that wolf brain of his. He tries to seduce her with a fish head, or bringing her dead animals. Or even his fighting skills:

William lost himself to the flurry of punches and kicks. Bones crunched, people howled, someone’s blood wet his knuckles. It went fast and was over too quickly. He tossed the last man at Cerise, just for the fun of it. She reached out and very carefully popped the Edger on the head with the hilt of her sword. He went down.

William strode to her. That’s how it’s done. Drink it in.

She surveyed the carnage behind him. “Did you have fun?”

He showed her his teeth. “Yes.”

Cerise is just about as cold a killer as William is. She has lived her entire life feuding with families and has learned to wield her sword with deadly accuracy. She says, “Failure happened. The trick was to accept the risk and try anyway.” That is how she lives her life. When her parents go missing, she becomes head of her unruly family, and carries quite a heavy burden. But she steps up, and basically says – bring it!

Speaking of her family, again, Ilona Andrews gives us a crazy bunch of people that bring so much to this story. We have aunts, uncles, and cousins all with very distinctive personalities. Two that really stand out are Lark and Kaldar. Lark is Cerise’s younger sister, who calls herself a monster. She hides in the woods and strings up dead animals. There is so much to her character that we haven’t even discovered yet and I really hope Ilona Andrews dives into her more in future books. We also have Cerise’s cousin, Kaldar who is very sarcastic, steals stuff from everyone, and is a good guy – but also on the edge of being sleazy. Again, he is set up to provide us with some good things in the future.

The world is amazingly imaginative, the villain is super evil, and events happen that made me go whoa! The attraction between William and Cerise is really great fun, with some very cute moments and the action never stops the entire book. I loved this book!! It can be read as a stand alone, but William is first introduced in On The Edge. This is a definite “Smexy Must Read!!”